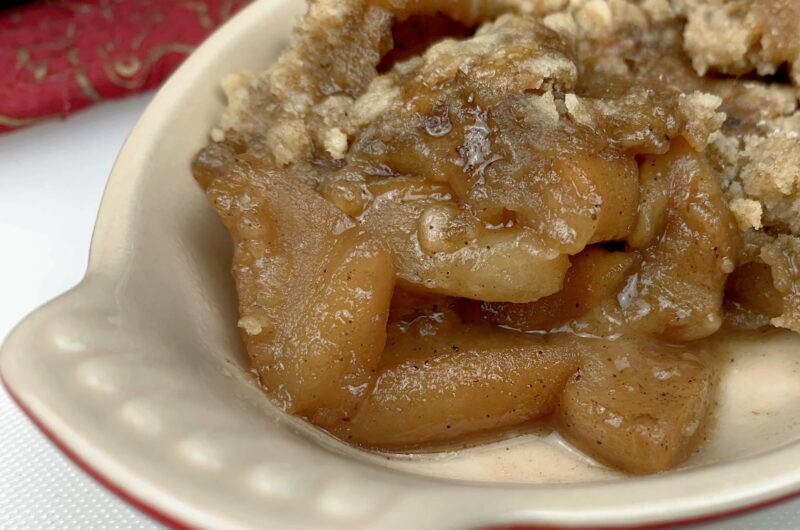 Smoked Cinnamon Apple Crisp is an excellent way to finish off your next smoked meal. I took the opportunity to include this in the smoker with a beautiful pork butt. Something just feels right about smoking pork and apples together don’t you think? Using a cast-iron skillet adds a great touch to this classic dessert.

To create this Smoked Cinnamon Apple Crisp, smoke the apples first then finish them off in your cast iron skillet. The results are amazing. A touch of smoke, sweet brown sugar, and a hint of cinnamon. This is a decades-old recipe we picked up when we lived in Toronto courtesy of Toby’s Good Eats restaurant.

Toby’s Good Eats on was a popular downtown restaurant back then – it seems they have transformed into a multi-unit pub-style menu now.

As you can see from this well-used recipe card, this dish has been popular with our family for over thirty years now. I hope it is as popular with your family. Especially now since we have added the apple smoking step I think you will really enjoy this smoked apple cinnamon crisp dessert. By the way, don’t look for Spy apples here in the U.S. – they are a Canadian thing. Fuji apples work just fine.

Keep in mind there are two parts to this smoked cinnamon apple crisp recipe. One for the filling and one for the syrup. Each one has its own brown sugar quantity. From the original recipe, we are splitting the original cook time of 60 minutes in half. 30 minutes pre-smoking the apples and the remaining 30 minutes for the final cook. Note the change in the smoker temperature for the second part of the cook-up to 350 F | 177 C.

All times are approximate. Please use the internal temperature as your guide.

Congratulations on your new pellet grill. Welcome to the world of smoking food. A few years back I too started my meat smoking journey and it has been such a blast. SmokeyGood was created to share with you what I have learned. "Smoker Cooking Made Easy" means clear, easy to follow recipes. My hope is to help you get started on a very rewarding and delicious hobby. Thanks for stopping by.